Ray Dyer's dreams of finding a better opportunity in the entertainment industry brought him to Georgia, but shortly after he arrived, it became apparent those dreams might die here.

When the former morning show co-host left a successful radio career in New York for a marketing agency in Marietta, the last thing he expected to find was joblessness. 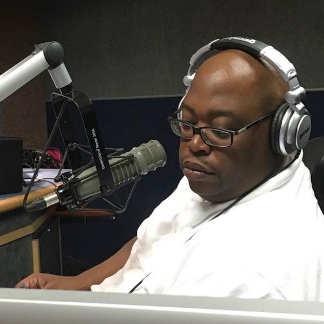 “I had my acceptance letter, my salary letter, everything,” he said, “but I got down here and couldn’t get in touch with anybody from the company.”

It wasn’t long before Dyer discovered his prospective employer had gone out of business. With his wife out of the workforce, Dyer’s family was left with no income.

“We spent a lot of our money just trying to make sure that the ends met and the walls didn’t cave in,” he said. But even with help from friends, the accounts soon dried up.

At the suggestion of a friend, Dyer’s wife sought help at MUST Ministries. The resources she received had become small luxuries for the Dyer family: a Thanksgiving turkey, Christmas gifts for their son, resume help and even a suit to wear to interviews. The help allowed her the freedom to finish her degree in network engineering.

Shortly afterward, Dyer landed a position in marketing for a local comedy club, and then his dream job as an on-air personality at V-103.7, an Atlanta CBS radio station affiliate.

“Everything picked up because of MUST,” he said. “If it wasn’t for MUST, I think we probably would have had to move back to New York, which was not an option.”

As a way of paying it forward, Dyer started Marion’s Heart, a nonprofit organization dedicated to providing children with the resources they need to have a full childhood. He also spearheads an effort to collect clothing specifically for larger men, for whom thrift shopping can often be difficult, and the comedy club he manages conducts a yearly toy drive benefiting MUST’s Toy Shops. “I want to make sure that MUST isn’t going anywhere,” he said.

Dyer also works as a motivational speaker, assuring his listeners that hard times don’t last forever. He likes to remember a saying that has stuck with him: “A step back is a set up for a comeback.”

Read more about assisting with employment: